Early in January AVC initiated a grassroots effort to put a non-binding resolution to the voters of each of the 4 impacted towns of Royalton, Sharon, Strafford and Tunbridge on Vermont Town Meeting Day, March 7th. The resolution read: “Shall the voters of the town of ______ oppose the NewVistas development?”

The purpose of the non-binding resolution was threefold; first to bring the issue to the attention of the residents of the four towns through a Town Meeting discussion; second to send a loud and clear message to the legislators and governor of Vermont; and third, to send a message to the NewVistas Foundation.

There were two avenues to placing a resolution to the Town Meeting agenda. One was to request the select board to add it to the agenda and the other way is to garner 5% of the voter list on a petition to satisfy Secretary of State requirements. The Tunbridge Select board agreed to place it on the agenda, but the other three towns went the petition route.

Strafford met the required 60 signatures early on, with Sharon following. Royalton due to its larger population required about 120 signatures, and it looked like it was going to be close. An effort was launched, and in just 3 days around 320 signatures were gathered. During the week of January 16th the petitions were successfully delivered to the town clerks in Royalton, Sharon and Strafford.

By the first week of February, the 3 select boards decided to include it on the Town Meeting agenda and the vote by the each of the select boards of Royalton, Sharon and Strafford was unanimous. It was now up to all of us to urge fellow voters to attend Town Meeting Day and vote yes to oppose New Vistas. We sent out a mailer to landowners in the four towns, held public forums, distributed our informational brochures and wore our “Vote YES to oppose” stickers loud and proud.

March 7th, 2017 Town Meeting day was a great success for us in the first step toward gaining attention from the state and educating those not yet informed of the project’s scale. All four towns voted in opposition to NewVistas with a little over 90% of the voters voting to oppose the development. Thank you to everyone who made this day a success!

We are proud of this accomplishment, but we know it is a small step toward working with our town select boards and planning commissions to prevent NewVistas statewide and providing a voice to everyone in our communities. Read more about the vote here.

Our Town Meeting informational brochures were made available at our public forums, distributed through our friend networks and located at several retail establishments within the four towns and beyond. 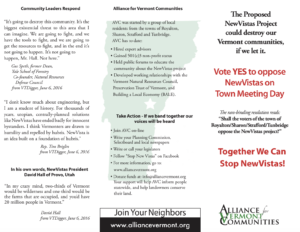 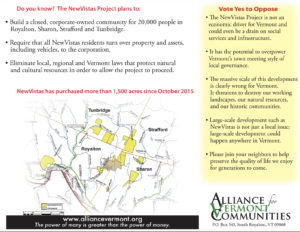